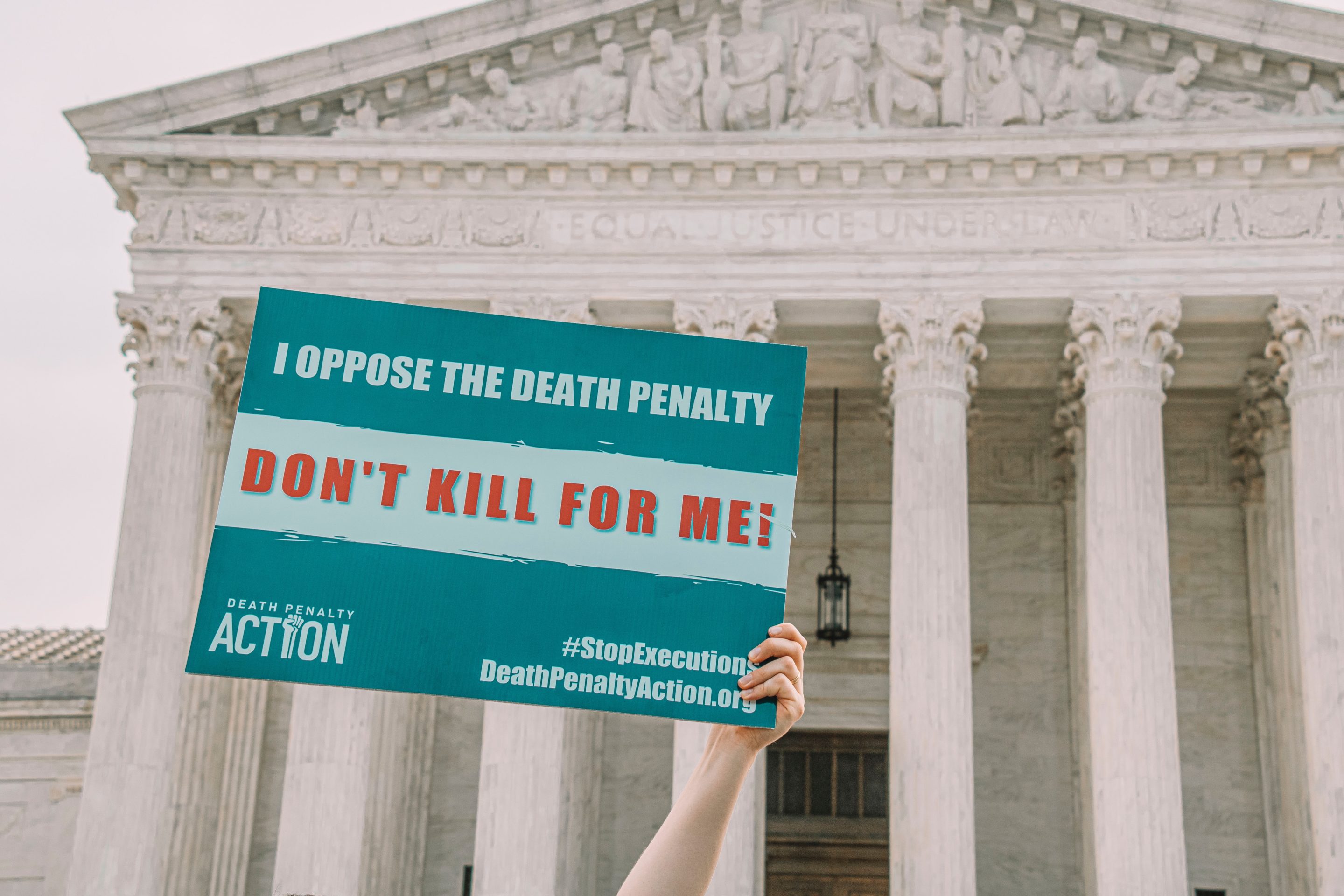 Ronald Gene Simmons was executed in the state of Arkansas on June 25, 1990, after killing fourteen members of his own family and two other people in December 1987. Simmons shot, clubbed, shot at or strangled 21 people, 16 of whom died. The dead included his wife, Becky, four of his daughters, three of his sons and four of his grandchildren. Eight victims were children, ages 1 to 17. After his first conviction, Simmons said he would not appeal and asked that no one interfere. However, death penalty foes intervened and delayed Simmons’ execution for two years.

Although capital punishment is allowed by the Constitution and is favored by a majority of Americans, it has been sparingly practiced in recent years. There are approximately 20,000 homicides committed annually in the United States, yet fewer than 300 of these lead to a death sentence. One source has reported that almost 80% of Americans favor capital punishment. Yet the justice system dishes out death sentences a lot faster than it dishes out death. About 300 convicts were sent to death row in 1989, ballooning the population to more than 2,300 in 35 states. The number executed in the same period: 16. Many individuals feel deep concern about the growing crime rate in our nation, yet they have also heard of the controversy over capital punishment and have wondered whether it has divine sanction. The Bible addresses this subject, so it is worthy for us to study.

Civil government is ordained of God for the proper regulation of society. This does not mean that each person in civil government is a child of God, nor does it imply that God is pleased with every decision by governmental rulers. The home is a divine arrangement, but not every home is pleasing to God; nevertheless, the home or family is divinely appointed as the fundamental unit of society. Paul stated, “Let every soul be subject unto the higher powers. For there is no power but of God: the powers that be are ordained of God” (Romans 13:1). Civil government, as an institution, therefore, exists by the ordination of God. It is the purpose of properly constituted civil government to protect and correct society. Alexander Campbell, in his noted essay on capital punishment, said, “The Bible has sanctioned republics, and commonwealths and kingdoms, without affixing any peculiar name to them. It prescribes no form of human government because no one form of government would suit all the countries, crimes, and people of the earth. But the Bible, in the name and by the authority of its Author, demands of all persons in authority that they protect the innocent, that they punish the guilty, and that they dispense justice to all.”

The “sword” is representative of the power over life and death. Vine defines the Greek word for “sword” (machairan) as a “short sword or dagger” (p. 1123). He goes further to say that it represents the “instrument of a magistrate or judge” (p. 1123). This word occurs 27 times in the New Testament. For the most part, it means a literal sword. However, in Matthew 10:34, Jesus uses it metaphorically for dissension — the opposite of peace. In Ephesians 6:17 and Hebrews 4:12, “sword” is used to represent the word of God.

Paul also uses the same word again in Romans 8:35 when he discusses the sword of rulers which may try to separate Christians from the love of Christ. In the context of Romans 13:4, “sword” refers to rulers who have power by means of the death penalty. This comparison shows that Paul consistently uses “sword” as an earthly power which Christians must yield to but also as a power which can try to pull us away from God. Concerning the definition of machairan, Rienecker adds, “The sword is the symbol of the executive and criminal jurisdiction of a magistrate and is therefore used of the power of punishing inherent in the government” (p. 378). Thayer states that machairan is “used of him to whom the sword has been committed, viz. to use when a malefactor is to be punished; hence to have the power of life and death” (p. 393). R. L. Whiteside says, “The sword, as here used, is a symbol of power — the power, or authority, to inflict the death penalty.”

Some have felt that the prohibition of the Decalogue ruled out capital punishment. The commandment said, “Thou shalt not kill” (Exodus 20:13). It is obvious, however, from a further reading of the same context that this commandment forbade murder, but it was never considered inconsistent with capital punishment. In the very next chapter, the law of God stated, “He that smiteth a man, so that he die, shall be surely put to death” (Exodus 21:12). All killing is not murder just as all sexual relations are not fornication. This is clearly delineated in the next verse which says, “And if a man lie not in wait, but God deliver him into his hand; then I will appoint thee a place whither he shall flee” (Exodus 21:13). Capital punishment is not only set forth as a prerogative of civil government under the law and the gospel, but the principle actually predated both. God said, “Whoso sheddeth man’s blood, by man shall his blood be shed: for in the image of God made he man” (Genesis 9:6). The reason assigned for this divine decree is noteworthy: “for in the image of God made he man.”

Alexander Campbell again commented, “The reason given for slaying the murderer is one of perpetual validity. If it was ever good and obligatory, it must always be so. So long as it stands true that man was created in the image of God, so long will it bind every religious and moral people to take away the life of the murderer. It is, therefore, of immutable and perpetual obligation.” M. C. Kurfees, in his treatise on capital punishment, said, “The very same identical reason which God Himself assigned for the law on capital punishment exists today with all the force it had when He first assigned it … the conclusion is simply inevitable that God’s law on capital punishment is still in force and will remain so while man remains on the earth …”

Pilate inquired of Jesus in John 19:10, “Speakest thou not unto me? knowest thou not that I have power to crucify thee, and have power to release thee?” Jesus did not argue the point with Pilate, but answered, “Thou couldest have no power at all against me, except it were given thee from above: therefore he that delivered me unto thee hath the greater sin” (John 19:11). Jesus did not deny that Pilate as an officer of the state had the “power to crucify,” but in fact confirmed that such power or authority was conferred upon him “from above.” The fact that Pilate abused his power does not negate the principle that civil rulers are authorized to inflict the death penalty. When the apostle Paul appeared before Festus, he said, “For if I be an offender, or have committed any thing worthy of death, I refuse not to die …” (Acts 25:11).

This would have been an opportune time for Paul to have argued against the death penalty and to have told Festus that it was contrary to God’s will. Instead, he confirmed that certain wrongdoing would be “worthy of death,” and under such circumstances, he would not refuse to die. He did not defend himself on the basis that capital punishment was wrong, but rather on the basis that he had done no wrong. He said to Festus, “Neither against the law of the Jews, neither against the temple, nor yet against Caesar, have I offended any thing at all” (Acts 25:8). Festus himself found that Paul had “committed nothing worthy of death” (Acts 25:25). Christians are admonished not to exact personal retribution for wrongdoing (Romans 12:19), but the principle of non-retaliation is not binding upon civil governments which are charged by God with the responsibility of “punishment of evildoers” for the good of society (1 Peter 2:13-14).

One of the most compelling motives in the spiritual realm for doing what is right is the certainty of punishment for wrongdoing (2 Corinthians 5:11; Hebrews 2:2-3). It has long been recognized that the absence or uncertainty of punishment is an encouragement to evil. “Because sentence against an evil work is not executed speedily, therefore the heart of the sons of men is fully set in them to do evil” (Ecclesiastes 8:11). We live in a permissive society where the crime rate continues to climb and law-abiding citizens often are not safe in their own homes and neighborhoods. It is the Godgiven responsibility of the civil state to be a minister “for good” to those who submit to its precepts, and to be “a revenger to execute wrath upon him that doeth evil.” To the extent that civil government fulfills its divinely imposed responsibilities, our society will be a better, happier, and more peaceable environment in which to live.

← Prev: God’s Purpose and Modern Religion Next: “Filled With the Spirit” →