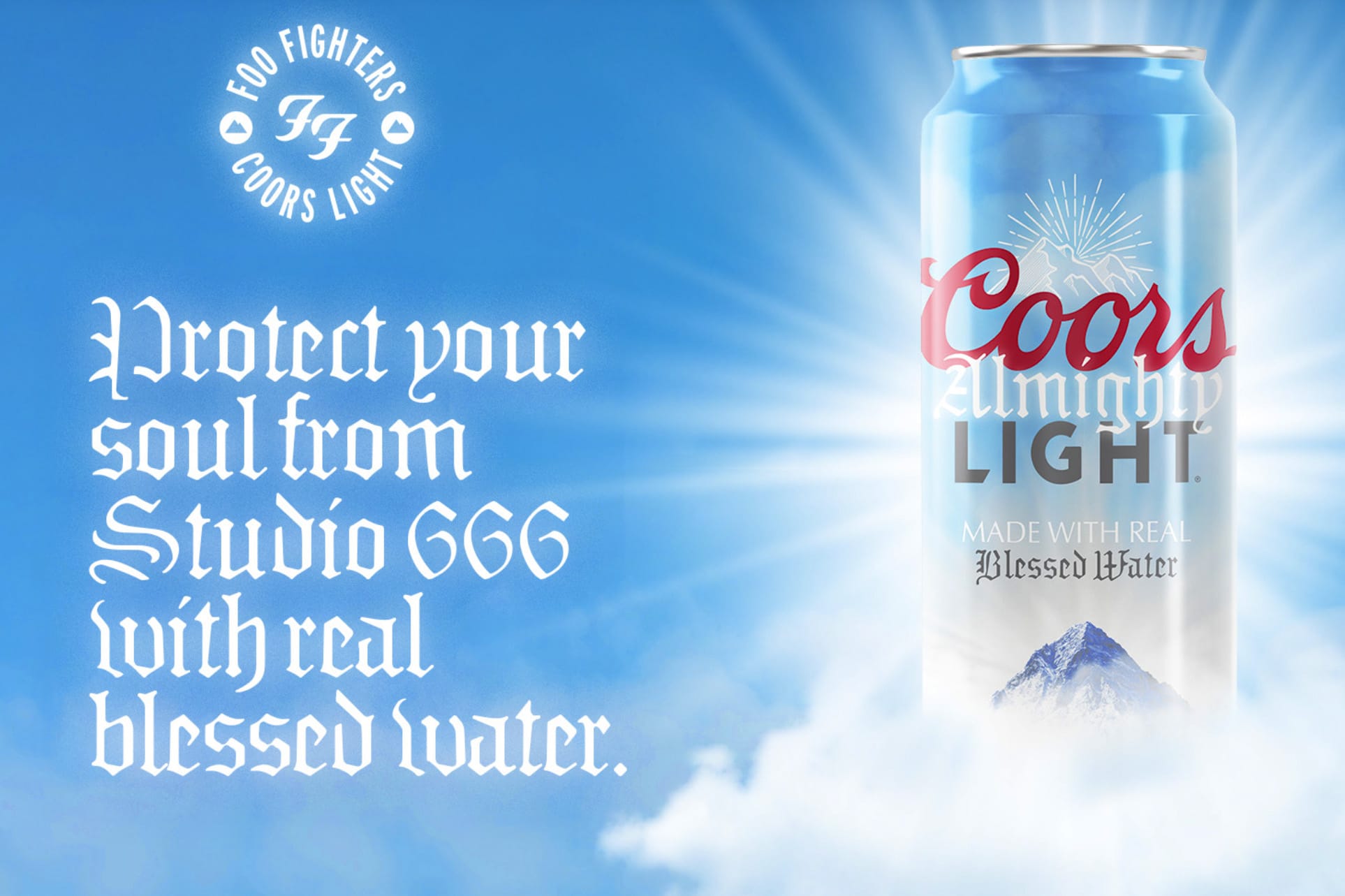 The Foo Fighters, a rock band formed back in the 90s, decided to “go for broke” and produce something they’ve never attempted before: a movie. Last year, Foo Fighters’ bandleader Dave Grohl explained the movie’s inception. “After decades of ridiculous music videos and numerous music documentaries under our collective belts,” he said, “it was finally time to take it to the next level — a full-length feature horror-comedy film.”

Produced in secret during the pandemic, the B.J. McDonnell-directed Studio 666 stars the Foo Fighters plus comedians Whitney Cummings, Will Forte, and Jeff Garlin. In the film, the band is forced to battle a supernatural force within the house where they’re recording an album. It was released on February 25, 2022.

Here’s where this gets really interesting. In connection with the film, Coors released “Almighty Light” as “the first spiritually-enhanced beer developed specifically to ward off demons while viewing the Foo Fighters’ dangerous new film Studio 666. Made with real sacred water that has been blessed by a non-denominational ordained minister, this drinkable demon deterrent will shield your soul with every sip.”

It’s difficult to know where to begin with this. Not only is it sacrilege, but it also glorifies drinking. Proverbs 20:1 says, “Wine is a mocker, Strong drink is a brawler, And whoever is led astray by it is not wise.” It does not say “intoxication” will mock you, but that the use of wine will mock you. When speaking of alcohol content, there’s not much difference between wine and beer.

If you claim that wine (or beer) is harmless enjoyment and fun, and will not mock you, then you’ve already been fooled by the devil enough to go against God’s direct statement. Proverbs 20:1 instructs that you are not acting wisely because you will be led astray.

Abstinence from alcohol is the standard of great and godly men. It was said of Daniel, “But Daniel purposed in his heart that he would not defile himself with the portion of the king’s delicacies, nor with the wine which he drank; therefore he requested of the chief of the eunuchs that he might not defile himself” (Daniel 1:8). John the Baptist was described in this way: “For he will be great in the sight of the Lord, and shall drink neither wine nor strong drink. He will also be filled with the Holy Spirit, even from his mother’s womb” (Luke 1:15). It should be our standard too (Ephesians 5:18). God’s elders in His church are to be “not given to wine” (1 Timothy 3:3; Titus 1:7). The word used is paroinos, which means “at, by, besides, or near wine.”

Andrea Todd wrote, “There is a powerful counter-cultural strain and one of the ways you see it is the tolerance of ‘soft’ drugs — like alcohol, prescription medication, and marijuana. Once you decrease the idea that a drug is dangerous, use of that drug goes up.” Abraham Lincoln said, “Alcohol has many defenders, but no defense.” There’s a lot of people who have a vested interest in painting alcohol use as lighthearted, fun, and innocent. But that’s hardly the case. Coors “Almighty Light” is a slap in the face to God and His righteousness.

← Prev: Did You Think to Pray? Next: Rosie Ruiz Fakes Boston Marathon Win →