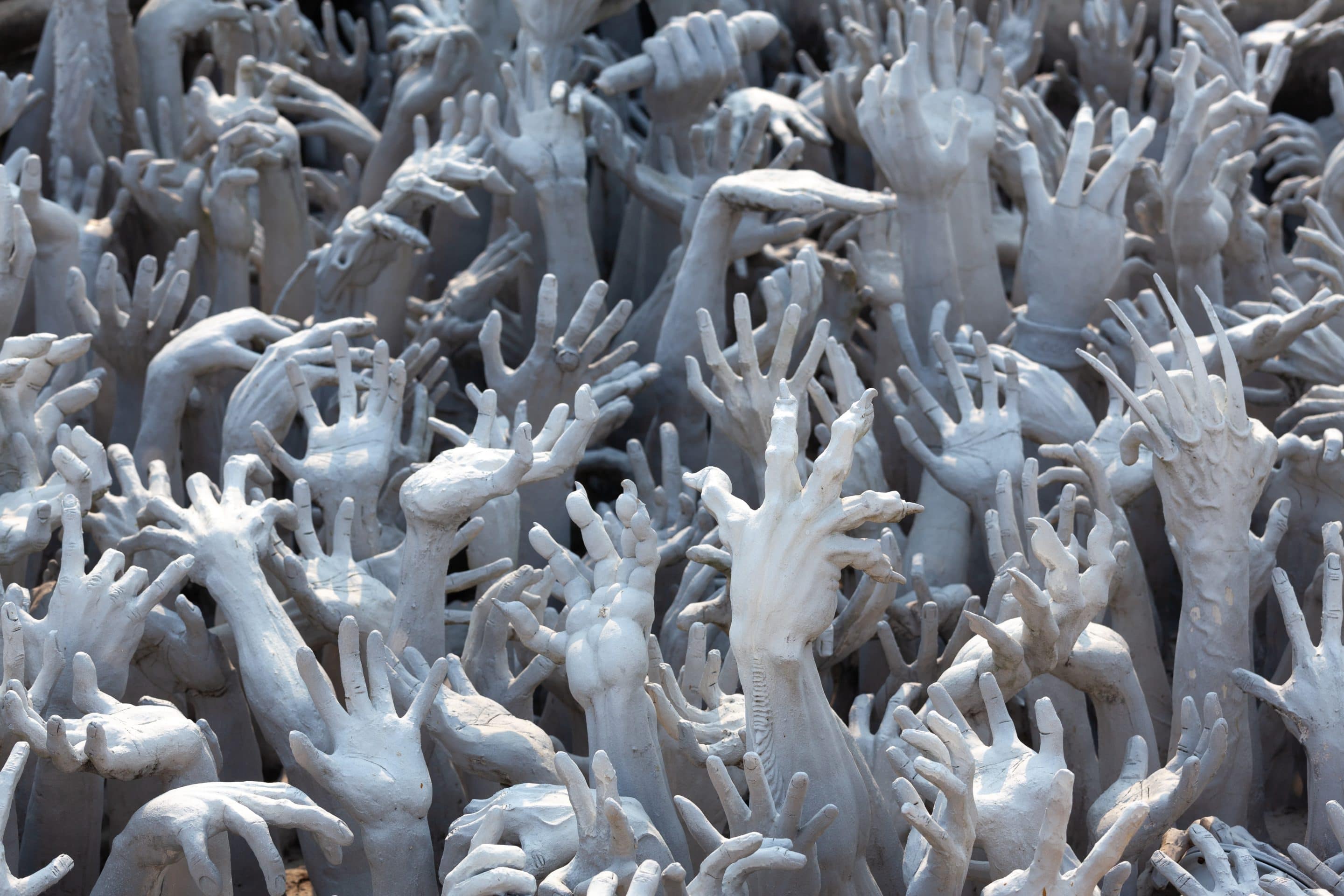 Recently in the Houston Chronicle, Allan Turner interviewed Edward Fudge, who was presenting his views on Hell at a Houston conference. Fudge repudiates the notion of an eternal place of punishment. He said, “There was nothing in the Bible that would lend support to the concept of an eternally burning lake of fire.” He calls the biblical viewpoint on Hell “traditionalism,” whereas he calls his viewpoint “conditional immortality,” which claims that only those who accept God are given everlasting life. Those not redeemed are destroyed.

The Bible’s emphasis on Hell is largely an understated theme today. Only 71% believe there is a Hell. Four out of ten adults believe that Hell is “a state of eternal separation from God’s presence” (39%) and one-third (32%) says it is “an actual place of torment and suffering where people’s souls go after death.” A third perspective that one in eight adults believe is that “Hell is just a symbol of an unknown bad outcome after death” (13%). Just one-half of 1% expect to go to Hell after their death. These statistics, along with Fudge’s prominent viewpoint, cry out for an examination of the doctrine of Hell.

First, Hell is a place of intense suffering. Fudge makes the case that the Bible does not support “an eternally burning lake of fire.” No one has said that the scriptures used in the Bible indicate a physical burning for the wicked. However, in Luke 16:23-24, the word for “torment” means torture which was used in the examination of criminals. “Agony” means intense anguish or distress. When in severe pain, the pain becomes an obsession of the mind. Time seems to stand still when you are in pain. We seek relief from the blazing heat of summer by seeking shade or by longing for the cool of the evening. But in Hell, there is no relief. There is only the torment and anguish that is pictured by pain and intense heat (Revelation 20:10; 21:8). “Outer darkness” is the farthest darkness from the lighted palace (Matthew 22:13). The Lord uses this phrase three times in Matthew (8:12; 25:30) to emphasize the separation, suffering, and despair. The idea of hopelessly suffering in darkness surrounded by wailing, howling, screaming, moaning, groaning, and the gnashing of teeth of others who are hopelessly lost and seeking death frightens me beyond belief. Man will not physically burn because he will be a spirit being, but he is capable of immense suffering.

Second, Hell is a place of memory. Hell might be more bearable if you could forget the opportunities you had in life. But when you realize that you have arrived in Hell because of the opportunities which you neglected because you sought your own fleshly desires, you followed after the world, you were proud and would not obey the gospel, and because you wanted your own way, it will add immeasurably to the suffering (Luke 16:25). In Luke 12:45-48 and 2 Peter 2:20-21, responsibility is contingent on knowledge and actions. There are so many people out there who know to do better, but they are rebellious. Our greater privilege allows us greater responsibility, but we must use it! If only the thought of the failures in one’s life could perish, perhaps Hell might be more endurable. But there is no possibility of a return to take advantage of wasted opportunities. A thought equally bad is that in Hell I would be helpless to change the course of those who were near to me in life and were following my example. Soon, they too will arrive to suffer, and I would have helped to bring them to Hell.

Third, Hell is a place of despair. Life’s most severe trials are punctuated by anticipation for some relief, for something better. In fact, the anticipation of some pleasure is one of Satan’s most potent tools to lure men into sin (cp. Hebrews 11:24-26). There is no anticipation in Hell. There is nothing to look forward to except more intense suffering, hopelessness, haunting memories, and endless despair. Who would want to be in a place such as this?

Fourth, Hell is a place of no escape. There will be no rest, ever (Revelation 14:11). The thought of no escape is as bad as the suffering itself. Suffering in our life is made better by the hope of relief, but this is not so in Hell. Jesus Christ took Hell so seriously that He could say without the slightest hesitation to remove your eye or cut off your hand or foot if it would keep you out of Hell (Mark 9:47-48). The worm (or maggot) mentioned here is one that feeds on dead bodies. It is used metaphorically to signify the exclusion of the hope of restoration. The unquenchable fire signals the same absence of hope. Once we are in Hell, we will stay for eternity (Luke 16:26). To suffer in Hell immeasurably without hope of an escape is more than the mind can fathom. There is no hope of escape through death or any other means (Matthew 25:41).

Who will be in Hell? First, those who practice iniquity will be in Hell. Earth has always been full of the immoral and Hell will be no different (Galatians 5:19-21; 1 Corinthians 6:9-11; Ephesians 5:3-5; Revelation 21:8). These passages positively prove that we will sow what we reap (Galatians 6:7-8). Sowing the seeds of adultery, fornication, uncleanness, worldliness, jealousy, and strife will never produce a harvest of eternal life. People who practice these sins will not inherit the kingdom of God. Heaven will contain nothing unclean or no one who practices abomination (Matthew 13:40-42; Revelation 21:27).

Second, those who do not obey the gospel will be in Hell. The apostle Paul’s teaching is clear on this point (2 Thessalonians 1:6-9). The strongly secular age in which we live is becoming more and more forgetful of God. Millions of Americans know more about Hollywood and movie stars than they do about Jesus Christ and His church. They know more about sports than salvation. So many people could not fill five minutes with intelligent talk about God’s character or His mission of man’s redemption. These people “know not God” in the truest sense of the expression. Responsible people cannot go to Heaven unless they obey the gospel by heeding the commandments given by God. Many preachers who think they are preaching the same gospel Paul did either deny the reality of Hell or promise people immunity from it upon partial obedience. Such preachers are enemies to the souls of the very people who look to them for religious guidance and proper direction for the future.

Third, those who are religiously wrong will be in Hell. Jesus will come to save His body of people which is the church (Ephesians 5:23). One can be a Christian without being a Catholic, Protestant, or Jew. The believers in Antioch were just called Christians (Acts 11:26). We can be everything God wants us to be by following His commandments (Matthew 7:21-23).

Fourth, unfaithful members of the Lord’s church will also be in Hell. Fifty percent of the virgins were lost. All ten were awaiting the bridegroom’s coming (Matthew 25:1-13). One out of three of the Lord’s servants (Matthew 25:14-30) failed to prepare and was consigned to outer darkness. In John 15:6, Jesus said, “If a man abides not in me, he is cast forth as a branch, and is withered; and men gather them and cast them into the fire, and they are burned.” Revelation 3:16-17 teaches that lukewarm members will be spewed out of the Lord’s mouth. One of the tragedies of lukewarmness is the complacent feeling of spiritual security. The church was headed for Hell and did not even know it. Going to Hell is as far removed from the mind of the lukewarm church member as the most distant star from our solar system.

Hell is a sphere that no sane and sober individual would desire to experience. Even one minute in eternal Hell would be 60 seconds too long. It has been correctly stated that if every lost sinner on earth could be taken to Hell for a one minute preview of coming eternal horrors and then returned to this life, that every one of them would immediately obey the gospel and become a Christian. The word of God clearly describes its horrors, the tormenting anguish, and the endless duration. All someone has to do is believe it.

Relative to Hell we should believe everything God has told us. We should believe its reality because He said it is a real place. The God of Heaven cannot lie and be true to His own perfect characteristic of honesty (Titus 1:2). Paul said, “Wherefore, sirs, be of good cheer: for I believe God, that it shall be even as it was told me” (Acts 27:25). It is with the same degree of surety that we can view the horrors of Hell as real and awful. These horrors will be as God told us.

Although Fudge denounces “traditionalism” regarding the doctrine of Hell, it is the Bible’s teaching. If you are serious about escaping Hell, the time to act is now. Repent of your sins and obey Jesus Christ. God sent Christ into the world to die for our sins. Do not harden your heart or suppose that some other day would be more convenient. Few people intend to arrive in Hell, but many arrive because they failed to act in the hour of opportunity.

← Prev: “Austin Congregation Raises a Toast to God” Next: Caring and Mercy →