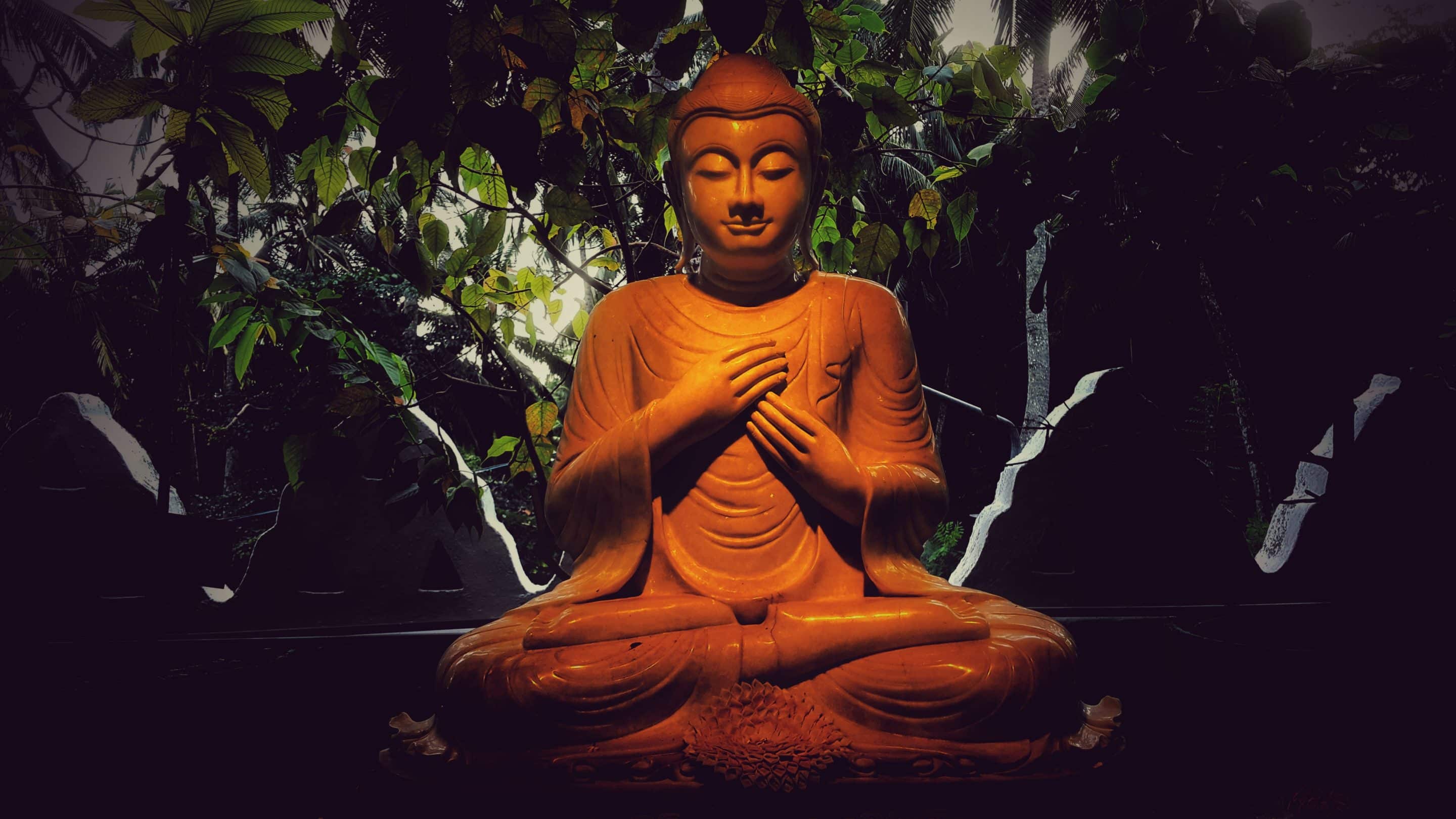 In a previous post, we looked at some of the basics of Buddhism, including a brief history and some of its major tenants. We are going to continue this series by comparing the beliefs of Buddhism to the Bible.

First, the essence and personage of God. Buddhism denies the existence of a personal God. It claims that the world evolved from and operates only by natural power and law, not divine command. Man is the center of all “religious” activity; there is no faith in or worship of God. In Zen Buddhism, God is man and man is God; all is God and God is all. There is a certain “force” (called tao) that penetrates everything, and that force is God. It also advocates that that any concept of God is beyond man’s grasp and thus not worthy of any contemplation. But according to the Bible, God is a spirit who is Creator and Sustainer, yet separate from the creation (Genesis 1:1-3). John 4:24 says, “God is a Spirit: and they that worship him must worship him in spirit and in truth.” Acts 17:24-25 adds, “God that made the world and all things therein, seeing that he is Lord of heaven and earth, dwelleth not in temples made with hands; Neither is worshipped with men’s hands, as though he needed any thing, seeing he giveth to all life, and breath, and all things.”

Second, the essence of truth. Buddhism says that truth (or enlightenment) comes subjectively through meditation. Thus “truth” differs from person to person. Each can have his own personal truth. There are different forms of meditation in Buddhism and the experience of enlightenment differs from sect to sect. The Bible says that truth is objective — it originates from outside of man. Truth comes from God and is contained in scripture and is never changing. Jesus said, “Sanctify them through thy truth: thy word is truth” (John 17:17). Psalm 117:2 says, “For his merciful kindness is great toward us: and the truth of the Lord endureth for ever. Praise ye the Lord.” The Lord also said in John 8:31-32, “If ye continue in my word, then are ye my disciples indeed; And ye shall know the truth, and the truth shall make you free.”

Third, human responsibility and salvation. Buddhism says that we are not trying to be saved from sin and its consequences, but from the law of karma and reincarnation. To Buddhists, “salvation” is a state of non-existence following the quenching of all human desire. This can only be achieved by one’s own effort; no outside help is necessary. But the Bible declares that it is not within man to direct his own steps (Jeremiah 10:23). Regarding the inspired scriptures, Paul wrote, “But the natural man receiveth not the things of the Spirit of God: for they are foolishness unto him: neither can he know them, because they are spiritually discerned. But he that is spiritual judgeth all things, yet he himself is judged of no man. For who hath known the mind of the Lord, that he may instruct him? But we have the mind of Christ.”

These inspired scriptures declare that all have sinned by violating God’s law, and are personally responsible for their actions (Isaiah 59:2; Romans 3:23; 1 John 3:4). God, by His grace, sent Jesus into the world to save mankind from sin and death (John 3:16; Hebrews 5:9). The forgiveness of sins is absent in karma and reincarnation, but is a critical part of the New Testament (Acts 26:18; Ephesians 1:7). Salvation results, not in non- existence, but eternal existence in a perpetual state of bliss. Hebrews 9:27 says, “And as it is appointed unto men once to die, but after this the judgment,” therefore reincarnation cannot be correct according to the Bible, nor can it be proven on its own merits. Furthermore, meritorious works to achieve future benefit after death, such as taught in reincarnation, is dismissed in scripture. Ephesians 2:8-9 reads, “For by grace are ye saved through faith; and that not of yourselves: it is the gift of God: Not of works, lest any man should boast.” As far as the afterlife is concerned, Buddhism believes one is ultimately absorbed into the universal essence. But the Bible claims we are personally in a place of life or punishment forever (Matthew 25:46).

Fourth, the value of man. Buddhism claims that man is a worthless creature and life is hardly worth living. Furthermore, man does not have an eternal soul and his entire existence is evil and full of suffering. But nothing could be further from the truth as presented in the Bible. Genesis presents man as the crowning jewel of God’s creation because he is made in the image of God (1:26-27; 2:7). Psalms 8:4-5 says, “What is man, that thou art mindful of him? and the son of man, that thou visitest him? For thou hast made him a little lower than the angels, and hast crowned him with glory and honour.”

Fifth, suffering. Buddhism says, “To live is to suffer” — no reason is given for suffering. No effort is made to explain the origin of suffering or give meaning to suffering. The Bible states that suffering exists because of sin (Romans 8:18-23). The book of Job shows that Satan has a hand in man’s suffering (1:9-12). Rather than being a meaningless experience, suffering can help refine our character and make us stronger. Romans 5:3-5 says, “And not only so, but we glory in tribulations also: knowing that tribulation worketh patience; And patience, experience; and experience, hope: And hope maketh not ashamed; because the love of God is shed abroad in our hearts by the Holy Ghost which is given unto us.” James 1:2-4 adds, “My brethren, count it all joy when ye fall into divers temptations; Knowing this, that the trying of your faith worketh patience. But let patience have her perfect work, that ye may be perfect and entire, wanting nothing.”

Who was greater — Buddha or Jesus? Buddha never made any effort to establish his authority for setting forth the “Four Noble Truths” or “Eightfold Path.” The words and teaching of Buddha are without confirmation or supernatural proof. Siddartha Gautama never claimed to be anything but a man and did not teach men to worship him. Siddartha Gautama died in 480 B.C., was buried, and remains in his grave to this day. Buddha’s grave remains full.

On the other hand, Jesus Christ spoke in agreement and by the authority of Jehovah God. John 1:1, 14 says, “In the beginning was the Word, and the Word was with God, and the Word was God … And the Word was made flesh, and dwelt among us, (and we beheld his glory, the glory as of the only begotten of the Father,) full of grace and truth.” He furthermore said, “I am the way, the truth, and the life: no man cometh unto the Father, but by me” (John 14:6). The words of Jesus were proven to be from God as they were confirmed by a multitude of miracles (John 20:30-31). So powerful were these miracles that even His enemies could not deny them (John 11:47).

Jesus boldly claimed to be divine and called upon men to worship Him. Jesus accepted the praise of Thomas when he addressed Him as, “My Lord and My God” (John 20:28). John 5:23b says, “He that honoureth not the Son honoureth not the Father which hath sent him.” Jesus died on Friday afternoon, was buried, and early on Sunday morning arose from the grave. The tomb of Jesus is empty! Romans 1:4 says, “And declared to be the Son of God with power, according to the spirit of holiness, by the resurrection from the dead.” The resurrection was the ultimate proof of His deity.

There is no hope for the Buddhist except he come to believe in Jesus Christ. The Christian must show the Buddhist that in “none other name under heaven given among men, whereby we must be saved” (Acts 4:12). Christ is all-sufficient and the hope of heaven is our only hope. Religions like these attempt to direct the worshipful mechanism God has placed in all human beings toward something other than the true and living God revealed in the Holy Bible. Because of their mystical nature, it is difficult know your state. But the gospel is based by faith on great evidence and wonderful promises.