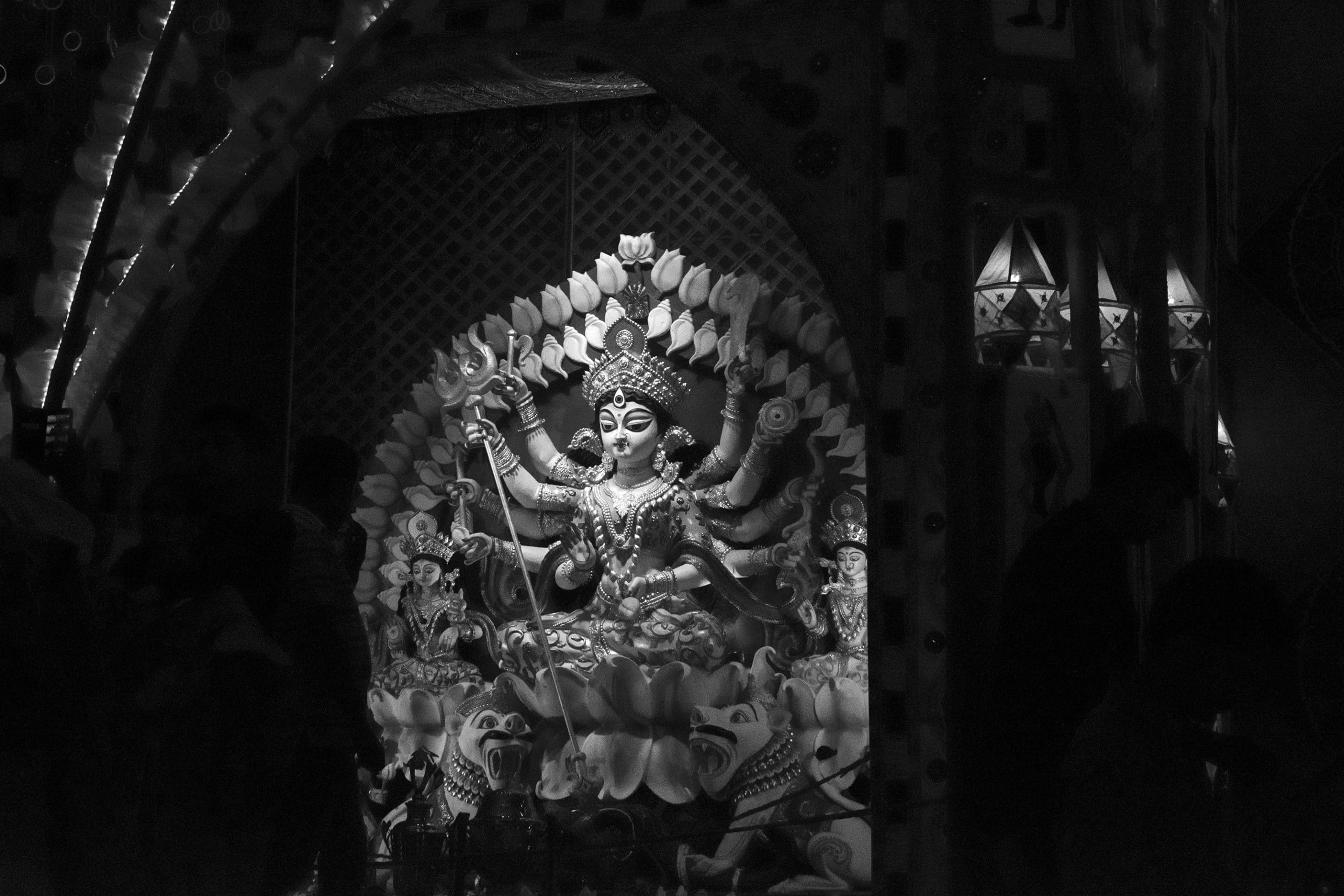 The Folly of Idolatry #2

Pan, who was worshipped in the region of Caesarea Philippi (Matthew 16), was considered to be the Greek god of wild nature. He protected shepherds, sheep and goats. He was believed to have been born in a central region of Greece called Arcadia and his father and mother were Hermes and Callisto. According to an account of his birth, his mother was so horrified by his appearance that she ran away leaving him to be raised by nymphs. He had horns, beard and legs of a goat, and he was able to shout so loudly that he terrified people and animals. He would usually shout to those who disturbed him while he was sleeping. His personality also had a gentler side. He was a skillful musician. He played so well the reed pipe called syrinx, that he challenged the sun god Apollo in a musical contest. Pan lost and Apollo received the prize for playing his lyre. The Romans identified Pan as either Faunus or Silvanus.

In Acts 14, when Paul and Barnabas were in Lystra, they healed a man who was “crippled from his mother’s womb.” Because of this miracle, they were worshiped as Jupiter and Mercury. The gods which were worshiped in Lystra would be the same gods worshiped over the whole heathen world. The miracle which Paul did led them to suppose that the preachers were gods. Zeus was known as Jupiter by the Romans. He was the most powerful of all the gods of the ancients. The worship of Jupiter was almost universal and he was commonly called the Father of gods and men. Hermes was known as Mercury by the Romans. He was the messenger of the gods, and of Jupiter in particular; he was the patron of travelers and shepherds; he conducted the souls of the dead into the infernal regions; he presided over orators and declaimers and merchants; and he was also the god of thieves, pickpockets and all dishonest persons. He was regarded as the god of eloquence; and was light, rapid and quick in his movements.

Artemis, who was worshipped by the Ephesians (Acts 19), was believed to have been born with her twin brother Apollo on the island of Delos. Their parents were Zeus and Leto. Artemis was the goddess of woodland and the personification of the Moon. She was also known as the goddess of the hunt. She was depicted as an eternally young and skilled huntress. She was always accompanied by a group of her attendants, the beautiful virgins of the Amazon, who were warriors and huntresses like her. Artemis was the symbol of virginity. She punished those who would violate her virginity or that of her attendants. Artemis and her brother Apollo had vindictive dispositions. According to a Greek legend, they killed most of the children of Niobe, who had insulted their mother Leto by comparing favorably his children with the twins Artemis and Apollo. Likewise, they were said to have killed Tityius for attempting to rape their mother Leto. Romans identified Artemis as their goddess Diana.

As one can readily see, mythology involved utterly fantastic tales based upon the very unreliable spoken word. These mythologies were repeated for generations. Often, this would result in blatant contradictions. Until it can be demonstrated that myths are tied to a verifiable sequence of actual events and deeds of living persons, they will lack the essential element of a historical narrative. This fundamental problem lies at the heart of the folly of idolatry.

Although idolatry like that which is found in the Bible is rare at least in the United States, our children do have exposure to groups like pagan societies which are active on many colleges campuses. These groups, which are a mixture of idolatry and the occult, are curious to dangerous for our youth. Because of this, we will examine some proofs of the Bible which will give all of us the faith we need to stand firm upon God’s Word and against the “wiles of the devil” (Ephesians 6:11).

The Bible has a vast store of evidence which supports its claims. First, there is manuscript evidence. Manuscripts are copies of the original New Testament letters and they number between 5,000-6,000. All of these, however, are not complete New Testaments. Actually, only a few contain anything like what could be termed a complete New Testament. In fact, the oldest fragment of the New Testament from the gospel of John was copied less than 100 years after it was written. By way of contrast, there are usually only a very few copies of important works of ancient literature. The History of Thucydides, for example, which was written about 400 B.C., is available today on the basis of eight manuscripts; while the few books that remain of the Romans historian Tacitus (approximately 100 A.D.) have survived on the margin of two manuscripts. This makes the New Testament without a doubt the best-attested book from the ancient world and infinitely more reliable than idolatrous mythology.

Another evidence for the Scriptures is the superiority of doctrine. While idolatry is attested by unsubstantiated mythology which includes immorality of the grossest kind, the Bible’s purpose is to save mankind from its sins. It is a book whose purpose is to provide a lamp for the feet and a light for the path (Psalm 119:105). The Word of God is truth, and it is truth that will set man free from the bondage of sin (John 17:17; 8:32). While one defiles and demoralizes, the other elevates and edifies.

The harmony of the Bible also provides powerful evidence. The Bible claims to be the Word of God over 2,000 times. This book is a collection of 66 books written over a span of approximately fifteen centuries. The several dozen men who wrote the Scriptures varied in their backgrounds and languages. Some were educated men while many were not. They also produced a wide topical span in their books such as law, poetry, history, prophecy, and personal letters. However, 2,000 years of investigation has not produced one contradiction of significance which defeats the unity of the Bible. The only feasible conclusion is that the Scriptures are the product of one, Divine mind (1 Corinthians 2:10-13; 2 Timothy 3:16-17; 2 Peter 1:20-21). But idolatry was prone to constant change, bordering on the absurd. Different places at different periods arranged the pantheon differently, proving its failure of unity when compared to the Scriptures.

Archeology adds to the weight of evidence for the Scriptures by uncovering amazing corroborative evidence to verify the biblical account. Finds such as the pool of Siloam in Jerusalem (John 9:7), the inscription of Pilate at Caesarea (Luke 3:1), the inscription of Sergius Paulus (Acts 13:6-7) and the ruins of the Ephesian theatre, silversmith shops and the temple of Artemis (Acts 19:24-35) all give remarkable credence to the message of the Bible. Therefore, archeology can prove that events happened as the Scriptures describe, but it cannot associate idolatrous myths with actual events and deeds of living persons.

Finally, fulfilled prophecy may very well provide the strongest evidence of all. There are numerous prophecies, given hundreds of years in advance, concerning events in the Old Testament such as the rebuilding of Jericho (Joshua 6:26; 1 Kings 16:34), Josiah’s purge of Judah’s idolatrous altars (1 Kings 13:1-3; 2 Kings 23:15-16) and the destruction of Tyre which was fulfilled by Nebuchadnezzar and Alexander the Great (Ezekiel 26:3-12; 29:12). But there are also literally hundreds of prophecies concerning Christ such as the fact that He would be born of a virgin (Isaiah 7:14; Matthew 1:18-25), He would be born in Bethlehem (Micah 5:2; Matthew 2:1-6), He would be called Lord (Psalm 110:1; Acts 2:36), He would be preceded by John the Baptist (Isaiah 40:3; Matthew 3:1-3), He would begin His personal ministry in Galilee (Isaiah 9:1-2; Matthew 4:12-17) and His side would be pierced on the cross (Zechariah 12:10; John 19:34, 37). From an evidences perspective, mythology simply has nothing to offer compared to fulfilled biblical prophecy. The attestation of prophecy proves once and for all the inadequacy of idolatry.

Similar to a jury coming to a verdict in a court of law, every rational and thoughtful person in the world must come to their own conclusion of the Word of God and build their faith based upon evidence. The evidence of the Scriptures versus the mythology of idolatry is vast. Idolatry is folly, while the Word of God stands the test of accuracy and reliability, thereby presenting itself as worthy of our faith and obedience.

← Prev: Jewish Feasts and Festivals #2 Next: UPC, Preaching Another Jesus #1 →