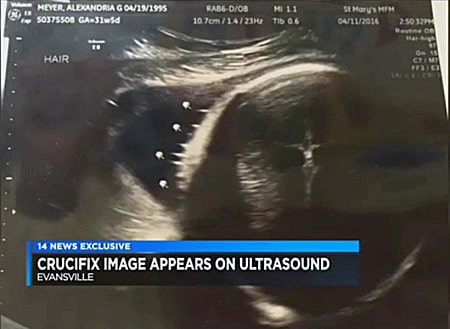 The Image of Jesus?

A few years ago, an Ohio woman saw what she thought looked like Christ on the cross when she went for her ultrasound for her baby due in August. She was shocked to see the image and said, “People say maybe my baby is gonna be blessed and maybe it is a good sign.” She went on further to say, “I don’t know, I’ve done wrong in my life, maybe he’s forgiven me early.”

Sadly, many people today believe that see “signs” everywhere. This reminds one of the responses the rich man received when he was in torment and wanted Abraham to send Lazarus back to warn his family of their impending doom. Abraham said, “They have Moses and the prophets; let them hear them. And he said, Nay, father Abraham: but if one went unto them from the dead, they will repent. And he said unto him, If they hear not Moses and the prophets, neither will they be persuaded, though one rose from the dead” (Luke 16:29-31).

There are no secret messages in ultrasounds, cloths or bowls of Wheaties. Everything that God has intended for man is contained within the Bible. It is the “word of his grace, which is able to build you up, and to give you an inheritance among all them which are sanctified” (Acts 20:32). Sometimes people look everywhere except the one place where everyone knows God can be found! The intent of this article is not to be harsh, but we do need to realize that God has given us His will. There is no need to look for additional revelation in any other area! Contact us for a study if you would like further information.