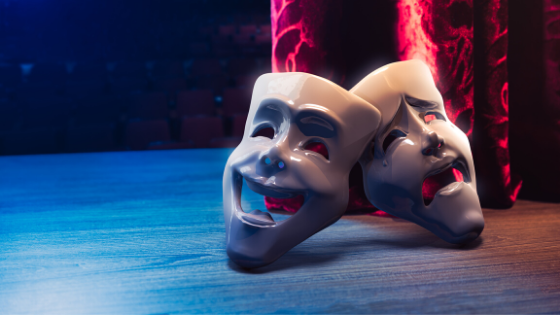 Several years ago, a meeting took place at the Woodsﬁeld Church of Christ. Woodsﬁeld is known by conservative brethren as the leader of digression in the Ohio Valley. Several preachers and church members concerned about the liberal movement met with the preacher and elders at Woodsﬁeld to discuss our differences and the issues that have been dividing churches over the decades.

The excuse used by the Woodsﬁeld Church of Christ was that all of their methods (i.e. plays, skits, and singing groups) taught the gospel of Jesus Christ. While learning can be accomplished while being entertained, is it the most effective form of education? Is it the Bible method of education? Jesus Christ, His apostles, and gospel preachers for centuries afterward have educated by public proclaiming and private teaching of the gospel. Paul said, “In Him, you also, after listening to the message of truth, the gospel of your salvation — having also believed, you were sealed in Him with the Holy Spirit of promise” (Ephesians 1:13; Acts 19:1-5). There is no command, example, or necessary inference that we are to teach by entertainment. Has the gospel lost its impact? Cannot the attention of our young people be kept by hearing the old, old story? Must we show them instead of tell them? Must we act it out instead of hearing and believing it? I stand with Paul to say, “For I am not ashamed of the gospel, for it is the power of God for salvation to everyone who believes, to the Jew ﬁrst and also to the Greek” (Romans 1:16). They can slice it any way they desire, but what occurred was entertainment and even the denominations know if you bring them in with entertainment, you have to keep them with entertainment. If the children of light can see this in the denominations, why cannot they see this within themselves?

How did the Woodsﬁeld Church of Christ get to the point of having these groups in their assemblies? Did they all of a sudden have a great idea and put it into practice? Only they can answer how this practice was accepted by all. I cannot answer this with certainty, but I am positive that it came about by the process of desensitization. Long ago the seed was sown that skits are acceptable. Possibly lessons were acted out in Bible class with the excuse being, “it is an effective way of teaching.” Now these children have become teachers and the next step of acting these out in front of the assembly is “not that bad,” or “it is an effective way to teach.” Now such groups are indifferent to the point of letting others worship for them (i.e. singing groups) and being entertained by drama groups. And yes, some of these things occur in their Lord’s day assemblies.

Brethren, the idea is to teach and preach the gospel and those with a sincere heart will respond and repent. If we attempt to “bring them under the sound of the gospel” with games and gimmicks we are employing novelties that, do not have a command, example or necessary inference. May we strive to look like the Lord’s church, as opposed to employing the devices of the denominations.

This attitude and acceptance of our entertainment culture is troubling to see in those who wear the name church of Christ. The plant is bearing fruit in the liberal churches as we see the magnitude of what has transpired. But the seeds are germinating among sound conservative churches as well. Appearing are props, costumes, robes all under the reasoning, “children learn by seeing and feeling.” One congregation, labeled sound, after their VBS class brings children in front of the assembly to act out their Bible lessons while female teachers stand in front of the congregation to direct them. Another church is continually changing their props so children can act out their Bible lessons on Sunday morning. These are just a few of the things that are occurring in the brotherhood.

What are these brethren doing? They are planting the seeds of a Thespian church. A Thespian church is one made up of actors and everything must be acted out to entertain, from the preacher down to the Bible class teacher. In a generation or less these congregations will be battling people wanting to have singing groups, “worship teams,” skits played to educate, etc. The time to stop this is before it starts. Brethren, burn those seeds!

In one of Jesus’ trials, Herod wanted to be entertained. Luke records, “Now Herod was very glad when he saw Jesus; for he had wanted to see Him for a long time, because he had been hearing about Him and was hoping to see some sign performed by Him” (23:8). But Jesus would not do it. Herod had heard the teaching of John the Baptist and did not repent. Possibly Jesus performing a miracle and satisfying Herod’s desire to be entertained would cause him to believe in Jesus. Jesus saw through it. If he did not repent at John’s words, neither would he repent if he saw a miracle.

Another time Jesus would have had the perfect opportunity to bring people to him was in the performing a miracle. If entertainment is a proper way to bring people “under the sound of the gospel,” Jesus could have done so by letting them see His miracles. After all, it was a good work. Notice what He told the leper in Matthew, “And behold, a leper came to Him, and bowed down to Him, saying, ‘Lord, if You are willing, You can make me clean.’ And He stretched out His hand and touched him, saying, ‘I am willing; be cleansed.’ And immediately his leprosy was cleansed. And Jesus said to him, ‘See that you tell no one; but go, show yourself to the priest, and present the offering that Moses commanded, for a testimony to them’” (Matthew 8:2-4). Now if Jesus was just concerned about getting people there by any possible means, He would have said, “go and tell everyone.” In John 6, when Jesus fed the 5,000, they continued to follow because of the food. John 6:26 says, “Truly, truly, I say to you, you seek Me, not because you saw signs, but because you ate of the loaves, and were ﬁlled.” He rebuked them for the reason that they followed. Would Jesus try to bring them in by physical means? If you do, you have to keep them by physical means! Jesus drove this point home by teaching some hard sayings and they left!

Jesus would not entertain to win souls and neither should we. Let us not be guilty of minimizing God’s word and buying into society’s philosophy of the need to be shown to be taught. Rather let us have faith in the word and teach the word and those with sincere heart will repent.